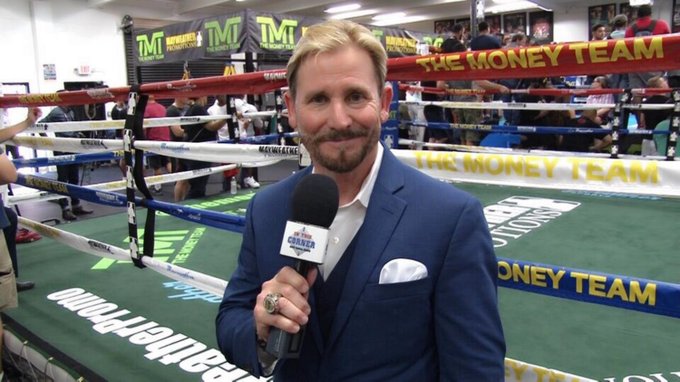 The palm trees, the sand, the balmy weather. Miami is where his story begins. As a child, he was a ball boy for the Miami Dolphins, befriended Hall of Fame Wide Receiver Paul Warfield and even appeared on Warfield’s television show. He was a standout football player at Carol City High School and later at University of Minnesota Tech, where he played the same position as his Miami Dolphins idol. But, that’s only half the story. At the age of eleven, a chance meeting with boxing legend Muhammad Ali at the famous 5th Street Gym on Miami Beach set him down the path that would define his legacy. He was destined for the fight game. In 1980, he decided to pursue a career as a professional boxer, competing for three years before finally discovering his calling as a sports commentator – a wise career move.

He is the host of “In This Corner,” boxing’s only syndicated weekly television show. One of the most well known and respected commentators in the game, he was inducted into the Florida Boxing Hall of Fame, Class of 2010, and the Nevada Boxing Hall of fame in 2016. He is currently the host and master of ceremonies of the International Boxing Hall of Fame weekend Induction Ceremonies, welcoming boxing’s most loyal fans to Canastota, New York each June. He is the second James Smith to stop by the “Lo’s Gym Blog” but there is only one “Smitty.” When it comes to talking boxing, he is the #1 pound-4-pound James Smith in the game. Today’s guest is the incomparable James “Smitty” Smith.

Q: At the “Tribute to Muhammad Ali” hosted by the International Boxing Hall of Fame in 2016 you shared a heartfelt story of your meeting with Muhammad Ali at the 5th Street Gym in Miami. I’d like to share that story with my readers.

When I was a little boy growing up in Miami, Florida, my uncle tried to take me to the 5th Street Gym to meet the great Muhammad Ali as he prepared for his first bout with Joe Fraizer. Unfortunately, Ali didn’t show up that day. But, I didn’t give up. What I did was camp out at the gym, around the corner. The building was located atop a drug store and I sat on the corner and waited. I had this white jacket on that my mother bought for me. I’d taken a magic markers and wrote “Muhammad Cassius Clay Ali” on the back. And, there I sat on the corner, wearing that jacket, looking back and forth, left and right. And, there he was. I could see two or three dark figures coming towards me. One of them was Ali. He was pretty hard to miss. He was dressed in all black. As they got closer I stood up and he walked over and looked down at me. He sort of circled around me and put his arm around me. Not much was really said. He just walked me up those rickety steps that led to the gym. Then he told Sully, the guy who was at the top of the steps, that I was his “main man” and that from now on I could come beyond the rope. From that moment on I was part of the entourage, so to speak. I was in the gym watching him train for that epic fight with Fraizer. One of boxing’s most epic battles. A funny story about that. My 6th grade teacher, Mr. Wilson, would let me skip school to watch Ali train. The guise was that I was going to write a report on Ali. But, Mr. Wilson loved Ali so much. He really just wanted to know about the fight. He was very worried about how that fight was going to go for Ali.

Do you have any Ali stories from your time in the gym during that training camp?

One day everyone was gone. It was just Ali and me. He was banging away at the bag. I was asking him lots of questions, interrupting his training. Finally, he stopped and said, “little white boy … what do you want to be when you grow up?” I told him that I wanted to be Johnny Carson. He came back with, “that’s a good job of you little white boy, you are like me … you never shut up.” As fate would have it, I did end up with my own television show just like Johnny Carson.

Looking back, can you quantify the impact of that meeting on your life and career?

That wasn’t the only thing going on in my life at the time. I was also a ball boy for the Miami Dolphins at the time. I’d met Paul Warfield and he actually put me on his television show, that same little white boy. Paul was like a father figure to me. He was very supportive to me over the years. I spent more time with him than Ali, because Paul was down in Miami. It’s funny to think, these two high profile black men saw something in that scrawny buck toothed little kid full of spunk.

You’ve made a name for yourself interviewing and working in close quarters with some of the greatest fighters of all time. But, you also have a little professional boxing experience as well. Correct? Before we get to your work in radio and TV, tell us about your fight days.

I boxed as a kid. I wanted to be Ali, of course. I was a good little athlete. I played pop warner for Carol City in Miami. Some of my teammates went on to become professionals. I ended up playing college football in Minnesota. Imagine that, from Miami to Minessota. I was too small to take football any further. But, as for boxing, Chris Dundee, Angelo’s son, took a look at me as a boxer. He thought I moved pretty well in there. I sparred with Anthony Collins, who was the Florida Lightweight Champion at the time. I boxing for three years as a professional. I was nothing special but I never went down or was knocked out. I realized early on that for me to have a successful professional career I was going to have to take a beating. It was actually Paul Warfield, when he was induced into the National Football Hall of Fame in Canton, Ohio, who helped guide me to this career. I was talking to Paul that weekend about my concerns over my pro carerer and he said, “you always wanted to be a broadcaster … do that … don’t box if your heart isn’t in it anymore.”

I would image those three years boxing as a professional help inform your current profession.

Absolutely. The experience of doing it has helped me when getting in the ring with fighters for my show “In This Corner.” I’ve been in the ring with 50 World Champions. That’s probably more than anybody on planet earth. I don’t think this 58 year old could beat up that 22 year old Smitty but he sure as Hell knows a lot more about the sport. I’m still learning things I didn’t know.

Speaking of “In This Corner,” I am a big fan. You get up close and personal with these guys, working the mitts and taking body shots on the rib protector. Are you ever surprised by how amazing these guys are?

When I first came up with the concept of the show, I was doing fights as a commentator and was getting tired of the travel, wanted to do something unique. Anybody can do an interview. Bernard Hopkins was one that stands out. He understands the subtle nuances of the game. Even after he lost that fight to Roy Jones, I was impressed by his boxing IQ. People thought I was crazy back then but I saw it. You don’t fight until your 50 years-old without being very smart and crafty. Even after he lost to Roy, I envisioned a great career for him. But, as far as being surprised by the boxers I work with, I do my homework. I usually know what to expect.

Even though you aren’t actually sparring, I would imagine that some of those guys are intimidating to work with.

Mike Tyson was certainly intimidating. It was toward the end of his career and he wasn’t a happy camper at the time. I knew Mike wasn’t going to hurt me, he likes me, but he did tap me with a right rand that knocked the bridge out of my tooth. Even with the pads, you could feel those body shots. At the time you think you are okay but you feel the effects later.

Is there one episode that is most special to you?

They are all special. I ‘ve worked with some great fighters. Guys like Floyd Mayweather. Kostya Tsyzu. Andre Ward.

You get to know these guys. You form relationships with them. Does knowing the fighters impact the way you predict fights, watch fights?

Yeah. The late great Bert Sugar paid me such a wonderful compliment. He said that I have among the best eyes in boxing. It comes from years of experience, paying attention to detail. Some guys don’t want to call fights with me because they don’t see what I see. For example, in the recent Cotto fight I saw that he was hurt. At first, I thought maybe it was a hand but it turned out to be a bicep injury. I saw it when it happened. The commetnators on television completey missed it.

Last June, at the International Boxing Hall of Fame, you and I had a conversation about the upcoming GGG vs. Canelo fight. We were both confident that GGG would win handely. What happened?

I was thrilled to be part of the countdown show for that fight. They had us all dressed up in 1930s attire. It was shot out in Los Angles. It was a great time. I like both guys very much. But, GGG clearly won the fight. I disagree with the judges on that one. As for the rematch, I just hope Golden Boy doesn’t try to drag it out and make GGG wait. I’m afraid he is on the other side, going down the hill. But, in the first fight he proved he had enough. The fight was close at times. Canelo stole moments. But, he probably only won 10 mintues out of the total 36 minute fight. Next time around, GGG needs to go to the body and cut the ring off more. Canelo proved that he’s smart and has solid defense. Next time out, I suspect GGG will take more chances, which could perhaps make for an even more interesting fight.

What are the big matchups you are looking forward to in 2018?

Spence and Thurman would be a great fight, both are young and unbeaten. Spence went across the pond to get his belt, scored a big win over a guy who I thought might have been the best 147 fight in the game a few years ago. I would probably pick Spence in that fight but it would very interesting. I also want to see Garcia and Loma fight. It would be wonderful. And, of course, AJ and Wilder. I would pick AJ but Wilder’s right hand is an equalizer.

Do you have any advice for young folks reading my blog, looking to get into the media side of the fight game?

“In This Corner” is must see television for true boxing fans. Check out Smitty’s work with Floyd “Money” Mayweather. For more episodes, click HERE