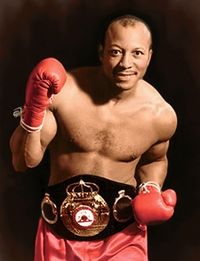 He was born into a family of sharecroppers from rural North Carolina, born and raised in a small town of about one thousand residents. He was the first member of his family to graduate from college, the first college graduate to win a heavyweight championship. He was the first boxer to knockout England’s Frank Bruno, the first to knockout “Terrible” Tim Whitherspoon. He was the first man to go the full 12 rounds with “Iron” Mike Tyson. He is a U.S. Army veteran, an ordained Baptist preacher, and, if you ask my opinion, has the coolest boxing nickname of all time. In anticipation for the release of “12 Rounds in Lo’s Gym,” I took it from West Virginia to the Carolinas for a chat with former heavyweight champion James “Bonecrusher” Smith.

JS: Okay. I’ll give you a little story about my upbringing in Magnolia. When I first started school I was a little crybaby. I was kicking and screaming and didn’t want to go. I told that teacher that I wanted to go home to my momma and daddy. Somebody told my momma about how I acted and she went got a fan belt. You know what a fan belt is? It makes a car run. Guess what? It made me run too. That’s how it was in my family. If I got a whooping at school that meant that I was getting one at home too. So, all them whoopings taught me two things. One … that I had to go to school. I graduated from James Sprunt Community College in Kenansville, North Carolina in 1973 with a degree in Business Administration. And two … those whoopings made me think that if I ever got enough to whoop other people I was going to do it. As you know, I did whoop a whole lot of people in my career.

Much of my book deals with the topic of first-generation college students. Were you the first in your family to attend college?

JS: I came from a family of sharecroppers. Yes, sir. I was the first in my family to graduate from college. I’m also the first college graduate to win the Heavyweight Championship of the World.

Take us back to that improbable win against “Terrible” Tim Whitherspoon for the WBA Heavyweight title. What are your lasting memories from that fight?

JS: Well, you see, I get this phone call one day – from this guy named Don King. Don was talking about settling the lawsuit I had against him and giving me a shot at the title. I said, “who, where, and when, Don?” He paused and then said, “well, I got a little bit of bad news for you … it’s gonna be against a guy who beat you last year.” And, man, let me tell you, Tim Whiterspoon had beat me from pillar to post the previous year. I said, “Don, you’re gonna have to give me a minute to think about it.” Then Don started talking about redemption. He said, “C’mon, Bonecrusher this is gonna be your chance to redeem yourself in front of the whole entire world … live on HBO Championship boxing … you can redeem yourself from that loss.” I said, “Don, where is this fight gonna be?” He said, “Madison Square Garden, the Mecca of Boxing … you can redeem yourself in front of the whole world on HBO Championship Boxing live at Madison Square Garden in New York City.”
And finally I said, “Don, when is this fight gonna be?” Don said, “in seven days.” (Bonecrusher laughs). I took that title fight on seven days notice, took on the guy who whooped me from pillar to post the previous year. I went from Magnolia to Madison Square Garden. Knocked Whiterspoon down three times in the first and became Heavyweight Champ.

You also had a big upset victory over Frank Bruno. He was undefeated at the time, correct?

JS: Yes he was. When I got to London, I looked around and saw all of those media reporters and said “where is Bruno, I’m going to knock him out.” One of those reporters asked me, “You really think you can KO Frank Bruno … he’s knocked out every American he’s faced.” I asked him if he’d ever heard of LL Cool J. Then I told him, “momma said knock him out.” Joking aside, Bruno was tough. He was wearing me out until the 9th and 10th rounds. He had me. But, I landed a good left hook, fired my shots, and they stopped it. I still don’t know where that energy came from.

Despite those two big wins, I would imagine many fans know you because of that heavyweight unification fight with Mike Tyson. What are your thoughts looking back on that fight?

JS: Yeah, a lot of fans know me because of the Tyson fight. You see, I fought Tyson back when he was a fighter not a biter. In his prime. I fought a very defensive fight. I was surprised by how short he was. All of my shots went right over top. He slipped all my shots. They all went over his head. I caught him with a pretty good right hand, a looping right, in that last round. If I had fought a different fight it might have turned out different. But, I was the first to go the full 12 rounds with Tyson.

You also fought a prime Larry Holmes. What was it like getting in there with him?

JS: Holmes was the type of guy that you need to put a lot of pressure on. You got to land heavy shots early. I tired out so quick in that fight. I didn’t pace myself. He was so much more experienced. He knew how to pace himself through a fight. He was a very sharp puncher. A great champ.

Because of your college education and time in the army, you had a very late start to your professional career. Any regrets in doing that way?

JS: I was 28 when I turned pro. It was fear that held me back. I was listening to the wrong people. But no regrets. I had a good career. I was always prepared and ready to fight. Don King tried to catch me [with the second Witherspoon fight] but I was always ready.

My father’s gym was, for a period of 5 years, located in a community center owned by a Baptist Church. You are a Baptist preacher, what do you say to those who might argue that boxing and church don’t mix?

JS: We call those people hypocrites.

Can I include that one in the interview?

Since retiring from the sport of boxing, you have also been active in community organization projects. Tell us a little bit about your work.

JS: In 2004 I started noticing a lot of parents dropping the ball in my community. I want to see parents step up for their kids. I founded an organization called “Champion for Kids.” There is nothing to be bragging about in saying that you are a single parent. 50% of marriages today end up in divorce. Folks fall in love before they get to know the person. In marriage, the sun is not going to shine every day. Your love will get tested. When that sun goes away, love gets tested. It’s going to be cold some days. It’s going to rain some days. But, to love someone is to love them even when it’s cold and it rains. We are about mentoring through boxing. Helping families stay together and helping kids in the community. A lot of kids grow up with just a mother and no father. My daddy put the fear of God in us and some kids don’t get that. They don’t fear anything and that’s the problem.

I also hear that you recently published a book. Tell us a little bit about it.

JS: I wanted to tell my story. Share my story. I started praying to God about how to do it. I didn’t even know where to start. But, I knew it was a story that most kids need to hear. A lot of these young kids want to be gang bangers and they want to be tough but I want young men to know that it is okay to cry, to cry out for help. I cry out to Jesus Christ when I need help. I have a talk with God. The title of my book is “M.A.D” which stands for “Make a Decision.” You can get it on Amazon.

Thank you for your time, Champ. Anything else you want to share with my readers?

JS: We have a New’s Eve 9-Hole Scramble Golf Tournament coming up on December 31st at Crown Park Golf Club (2225 Highway 9 West, Longs, South Carolina) and we’ve also got the “James Bonecrusher Smith New Year’s Eve Party.” Visit my website to learn about both events. These are fundraisers for the Boxing Legends Hall of Museum that we are working on. It’s going to be a mobile museum. Not everybody can visit the Muhammad Ali Museum in Louisville or the Boxing Hall of Fame in New York. We want to bring the museum to the people.

To learn more about “Champion for Kids,” Bonecrusher’s autobiogoraphy, and all of his upcoming fundraiser events, click HERE