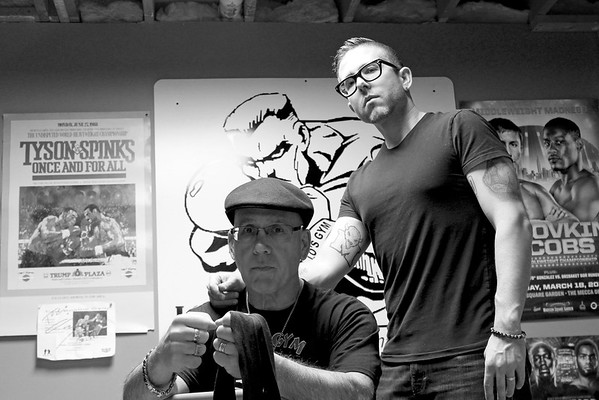 Over the past three months, I have had the pleasure of interviewing some of my childhood boxing idols, former world champion fighters, future International Boxing Hall of Fame inductees. I’ve chatted with prolific and award winning writers, boxing journalists, and even movie and television personalities. I’ve talked with boxing promoters, professional referees, and some of the toughest brawlers to ever come out of the state of West Virginia. ESPN’s Teddy Atlas called my home while I was trying to give my son a bath. James “Buster” Douglas phoned my home the very next day. I can’t even get into the hilarious phone conversation I had with James “Lights Out” Toney. From Christy Martin to Chris Algieri, getting to know all of these great human beings has been an absolute honor. I am grateful to everyone that took the time to chat with me. Thank you.

This will be my last interview before the official release of “12 Rounds in Lo’s Gym: Boxing and Manhood in Appalachia.” The opening bell has yet to ring and we are already the “#1 New Release in Boxing” on Amazon. My love and appreciation goes out to everyone that pre-ordered the book. To the boxers, I hope that I made you proud. To my hometown of Cowen, West Virginia, thank you for teaching me how to fight. I’ll always be a kid from Webster County no matter where life takes me. For this final interview, I decided to take it back to where the story truly begins. There is only one fighter left to interview. Please welcome to the “Lo’s Gym Blog,” the man himself, my father – Mike “Lo” Snyder.

Because of my publication schedule, and our timeline for the book, I wasn’t able to let my readers know one rather significant part of your life’s story. Last spring, you retired from coal mining. You spent four decades down in the West Virginia mines. How does it feel knowing that particular fight is over?

MS: I was a very young man when I got my start in the coal industry. I was straight out of high school. I never wanted to be a coal miner. My dad didn’t want me to be a coal miner. My dad didn’t want to be a coal miner. But, it was the only avenue we had. And, when you become a father at 21-years-old you take on the responsibilities of a family. You have to be dedicated to the very end. Whatever it took to make a living for my family was what I was going to do. It wasn’t about what I wanted anymore. It was about what I had to do for my family. Over the years, I met thousands of great people who made a very positive impact on my life. I will miss the people but not the job. When I look back at my career, it’s not what I wanted to do. I always wanted to be a coach. High School or maybe small-level college football. And, if I would have had a “Lo’s Gym” to walk into, I think I could have been a professional boxer and a good one too. But, as I look back at my life I have no regrets. Both of my children have “Dr” in front of their names. I live for my children. There is nothing I would change about my journey.

“12 Rounds in Lo’s Gym” was a long time coming. You and I conducted over twenty interviews over the course of three years. Last week you were able to actually read the book for the first time. How did it feel reliving all of those old fight memories? What were the standout moments for you?

MS: To me, the standout moments of the book were the parts that talk about remembering the least. Because, my whole thing about coaching little league football, junior high school football, weight lifting with youth in the area, and starting Lo’s Gym, was to help kids turn their lives around. I never felt like anybody in my own life ever got behind me to help me achieve my dreams. Believing in yourself typically isn’t enough. You need people behind you that want to help you succeed. I wanted to be that person for kids in our area. I used to tell my boxers, “when you have a fight, 99% of the people come to see you lose.” That is how life is. As for the book, it is a good story. I hope people read it and remember to stand up for the least.

I recently told a reporter that Cowen, West Virginia is as much a character in the book as the boxers. I’d imagine you were pleased to read the story of Cowen in the book.

MS: We come from one of the toughest places in the world. There is nowhere to go but up. Boxing is a tough sport and Cowen is a tough town. Our people are fighters.

The most difficult parts of the book to write were the scenes from your adolescence. Coach Marvin Gothard and Rick Cogar were key characters in those scenes. Why was it so important to you that I honor both men?

MS: Coach Gothard was the most influential person in my life, outside of my family. He was the person who showed me how the world works. He was a second father to me. I loved him that much. His passing was like my father’s passing. I always felt like his service to our county was never honored. That’s why I did the “Marvin Gothard Classic.” I hope anybody who reads the Rick Cogar parts of the book will think about their own best friends. It is a hard thing to do, to lose a best friend. It is like losing your right arm, you’ll never be the same. Rick was my true friend. I worked with his dad and his brother Jerry in the mines. They all meant so much to me. His Mom and dad and sisters and brothers. The whole family means a lot to me.

I know that you loved all of the fighters you worked with over the years but was their one specific fighter that you enjoyed reading about the most?

MS: Dustin Wood. He exemplified everything I wanted to do with the gym. I put in 12 hours a day at the coalmine, sometimes ran down to the gym without even eating supper, and there were days where that was tough. But when you see a kid like Dustin Wood turn his life around it is all worth it. He wasn’t a bad kid, or into trouble or anything. He was always the kid that got cut, or the kid on the bench. To see him become a two-time state champion, to see him go on to become confident, to see him go off to college and become successful in life, those were the moments that made it all worth it.

Those years weren’t always good times for our family. Were there parts of the book that were difficult to read?

MS: Yes, there were parts that were difficult to read. From the gym shutting down to getting laid off. But, reading about your mother’s cancer was the toughest part to read. It brought back a lot of memories. When it comes down to it, family means more to me than anything in the world.

MS: Tommy Franco Thomas. He is very near and dear to my heart. His brother, Jerry, represents West Virginia boxing so well. I was happy to see all of the West Virginia boxers represented in the book but especially the Thomas brothers. And, of course, my good buddy Mike Snider. We don’t only share the name but also have a common bond in the type of people we want to be in this life. I am proud to share a name with him, even though he doesn’t know how to spell it.

I know that you’ve enjoyed reading the interviews posted on “Hillbilly Speaks” over the past few months. We’ve had some great conversations about them. Do you have a favorite?

MS: Teddy Atlas. Teddy is somebody that I hold very near and dear to my heart. He is somebody that personally contributed to my gym, somebody that has done so much for the sport of boxing. He is sometimes criticized for his passion but he is such a truthful man, he cares as much for the fighter outside of the ring as he does inside the ring. Teddy is out to help people. That’s his number one goal. He gives 100% to his fighters. I know he sometimes seems like he is a rage but he is passionate about what he believes and he is certainly a man of his word and a man of his convictions. He has gone to all of the boroughs in New York, the toughest places, and set up boxing gyms to help troubled youth. Teddy does that because Teddy remembers the least.

Your mission for “Lo’s Gym Boxing Club” has been well stated here and in the book. What message or moral do you hope readers take away from the experience?

MS: I hope and pray the message they get has nothing to do with me, with Mike Snyder. I don’t want patted on the back for anything that I did. I hope people find hope in the book. I hope they find something they can take away and apply to their lives. I hope it makes them think about how they can use their own talents to help people that don’t have it so good. In America, we should care less about being served and care more about serving.

Final Question. Have you trained your last fighter? Would you do it again?

MS: I would love it. The passion will be there until I die. When the final bell rings, it’s over. But, the final bell hasn’t rung for me yet. I am still looking for that one kid that I can help. I want to find that kid who doesn’t have anything going for him and take it all the way to Madison Square Garden.

To check out my recent interview on the PAC Sports Podcast, click HERE