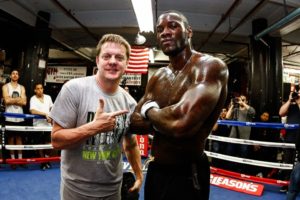 “People don’t come any tougher than they are around here,” my father would tell his fighters down at Lo’s Gym Boxing Club. “They ought to be worried about us … we’re from a tough place,” he’d sometimes add. Cowen, West Virginia is an unlikely location for a boxing memoir. Tucked away deep within the Appalachian Mountains, Cowen is marked by both outdoor beauty and rural seclusion. No major interstates or highways pass through the region, there is only one stoplight in the entire county and even that stoplight isn’t necessary. Before the downward spiral of the coal industry, it was once a thriving mountain town. The dawning of the 21st century brought with it hard times for an already hard way of life. The people of Cowen are most certainly fighters but a boxing town it is not. “12 Rounds in Lo’s Gym,” is a story of the spirit of boxing finding its way to an auspicious location.

Boxing history is full of famous fight towns, locations that serve as breading grounds for champion boxers. Spatial identity has always been a hallmark of the sport. The simple mention of Philadelphia conjures up the images of “Smokin” Joe Fraizer, Bernard Hopkins, and more recently Danny Garcia. When you think of Brooklyn, Mike Tyson, Riddick Bowe, Mark Breland, Zab Judah, and Daniel Jacobs quickly come to mind. Detroit gave us Joe Louis and Thomas Hearns and thus came to be known as a fight city. It only takes one break out star to change the perception of any given location. At least that’s the way my father saw it. He was always for the underdog, the guy from nowhere. You didn’t need to be from a big city or a fight town to be a fighter. That was his truth. Maybe a little bit of that is in me as well. I root for the underdog. I cheer for the guy who has the deck stacked against him. Maybe it’s a West Virginia thing? The recent success of the SKYY Boxing gym in Northport, Alabama has brought to fruition what my father, the full-time coal miner and part-time boxing trainer, had always believed about the sport. You don’t have to be from a fight town to be a fighter.

He is the head trainer for 2008 Olympic Bronze Medalist and reigning WBC Heavyweight Champion Deontay Wilder. As both a trainer and manger, he is a pioneering figure in the state of Alabama. Home to the “Bronze Bomber,” his boxing gym is rapidly becoming known as a hot spot for boxing in the south. In dedication to all small town trainers and boxers who struggle to overcome regional stigma, we decided to check in with Tuscaloosa’s Jay Deas of the SKYY Boxing Gym.

This might be an understatement but you’ve certainly had a nontraditional path to becoming the trainer of the Heavyweight Champion of the World. How did you find your way into the sport of boxing?

JD: I was always into boxing, since I was 14 years old. My older brother was the local trainer here in Tuscaloosa. I was a television reporter in Florida at the time when he really got into it. My brother was here in Alabama, training guys who had nowhere to fight. I decided to come back to help him with the gym and to help him promote his own shows. This was back in 1995. The boxers in this area were tired of not getting their fair shake, tired of always being the opponent. We had a lot of interest in boxing around here. There were several guys that wanted to go professional but they didn’t know how to go about it. The great thing about it is that we’ve continued to do those local shows. We still do them for the younger guys. We’ve done 87 shows over the last 22 years. As things moved along, I went to learn from other experienced trainers that I believed in. For example, I flew out to Houston and worked with Ronnie Shields. I took it in like a sponge, wrote it all down, added my own twist, and came up with my program.

So, let me see if I have this right? You get your program together and in walks the next great American Heavyweight Champion of the World. It was that easy?

JD: After we finally got the program together, he was the first kid that walked through the door (followed by laughter). Deontay came along at the absolute perfect time. It was 2005. If he had came five years earlier, we wouldn’t have had the experience or known the proper course to take. It wouldn’t have been the same level of program we had when Deontay walked through the door that first time. It was absolutely perfect timing. When he walked through the door we had been around the world to Dubai, Mexico, Canada, Finland. We knew who was who and what was what. In boxing, you meet the best and the worst, nothing in between. We were seasoned. We knew what to do. We could say to Deontay, “here is the path.” It was extremely beneficial that we had the prior experience. 5 of Deontay’s fights were here in Alabama, 4 after becoming heavyweight champion of the world. He has taken our program to new levels. Thankfully the program was in place when we found him.

The fact that Deontay stayed loyal, even after his break out success, speaks to the quality of the program that you are running at the SKYY Boxing Gym.

What do you think Deontye’s success will do for boxing in Alabama?

JD: Before we got second sport guys in the gym. I’m talking about guys in their late 20’s and early 30’s. Fortunately, we were able to do well with those guys. The best we could. Now we get guys who see boxing as their #1 sport. We have more younger fighters, better athletes. And, now that Deontay has gone on to become successful the new kids listen a lot better.

I’ve heard the rumor that you are the first-ever licensed promoter in the state of Alabama? That can’t be true, right?

Well, I was the first under the new commission. The old commission was disband back in the 1970’s due to corruption. When we were first starting out we had to use other state commissions to regulate our shows. We had to lobby the legislature for years to get our own commission. It got to the point where other states would not come in and do our shows. We were in between a rock and a hard place. When Deontay won the bronze medal we submitted this packet to the legislature with one image on the top. It was a picture of Deontay with the American flag and the bronze medal. The print out said, “He can fight for our country but can’t fight in his home state.” The new commission finally passed in 2011.

In my upcoming book, “12 Rounds in Lo’s Gym,” I talk about the difficulties boxers from the rural south face when trying to break into the pro game. Why do you think fighters from places like West Virginia, Mississippi, and Alabama have a harder time gaining mainstream success?

We have what folks call a Midwestern circuit and a Southern circuit. In boxing, those terms are used as derogatory terms. From the outside, promoters look at it like these are the guys their prospects can beat up as they climb the ranks. West Virginia guys have to be home grown, so to speak. They have to build up their records locally and then take their shot. Most of the time that means taking a fight that isn’t fair. You take your shot, fight some guy who has Olympic experience or is more seasoned nationally. When you lose it leads to the perception that guys from those areas can’t fight. But, it only takes one guy to change that perception. Byron Mitchell (Dothan, Alabama) broke through in a big way and things started changing. Guys from these areas are not automatic wins anymore. The same thing happened when Roy Jones Jr. (Pensacola, Florida) broke through for the golf coast. Think of Greg Haugen. Think of Vinny Paz. Things aren’t like they used to be back in the 50’s and 60’s. Now you can fly your fighters to other places to get top notch sparring. Dion Nicholson, for example, is a light heavyweight in our gym. He flew out to Big Bear and sparred with GGG. Look, we [Skyy Boxing Gym] known we have to grown our own talent. We get calls from guys form other areas wanting to train with us but we’re not going to get a 3 time national champ from Russia who wants to come to Alabama. But, things are changing. The perfect example is Terrance Crawford coming out of Nebraska. Guys like us root for guys like Terrance. We root for the guys in West Virginia. We know how it is. We didn’t come up with access to promoters, being on television from our first fight on, etc.

I apologize beforehand but I have to ask this question. Are we going to see Deontay Wilder vs. Anthony Joshua in 2018?

We are ready. We called for it. We just finished our mandatory defense so there is no reason to wait. Joshua just completed a mandatory defense as well. As far as our side, we want the fight as soon as humanly possible. We’ve reached out and we are ready. People don’t realize that when everybody was avoiding Ortiz, Deontay told Al Haymond and Shelly Finkle that Ortiz is who he wanted and to make it happen. And, we did. Of course, you know how that worked out. Ortiz tests positive. Deontay wants the big fights and there is no bigger fight than this. I do understand that they can make a lot of money not fighting us. I get that there is the WBO belt out there. But, this is what the boxing world wants and I don’t think the boxing world will stand for much else. It’s a great fight. Two fighters with Olympic pedigrees. Both are tremendous punchers. It’s a match of skill and will, a fan friendly fight. I get the “let it simmer thing.” I do. But, how much bigger can it be? You aren’t going to sell any more tickets in November of 2018 than you’d sell in the spring. We are past the “simmer” stage. It’s cooked long enough.