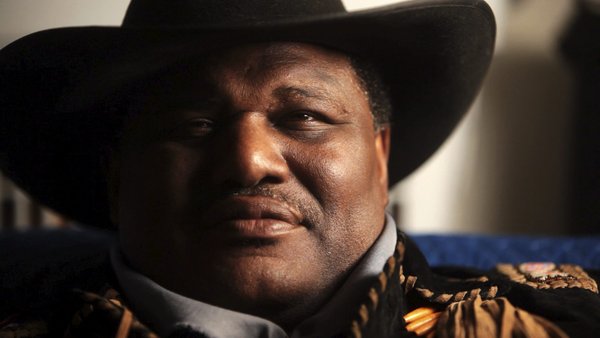 In the spirit of Lo’s Gym Boxing Club, home to Appalachian underdogs of the squared circle, the original aim of the “Lo’s Gym” blog was to highlight the stories of boxers from non-traditional backgrounds. I wanted to tell the stories of boxers that don’t fit the mold, those who defy social expectations. Today’s guest is perhaps the ultimate example of such a fighter. How many boxing cowboys do you know? He scored a classic boxing nickname from none other than the great Muhammad Ali. He’s climbed in the ring with punchers like Earnie Shavers, Greg Page, and Mike Tyson. He’s appeared in a Steven Speilberg film, even played Oprah’s boyfriend. Please welcome to the “Lo’s Gym Blog,” the one and only Fighting Cowboy – James “Quick” Tillis.

You and I were scheduled to chat back in January but “life,” as it sometimes does, got in the way.

JT: I apologize for the delay, I had a horse wreck and been laid up with a rib fracture. On the mend, taking it easy.

You are the “fighting cowboy” after all. I hope it is a speedy recovery.

Tulsa, Oklahoma isn’t exactly the kind of city that most folks think of when thinking about professional boxing. Tell us a little about your upbringing in Oklahoma and how you found your way to the squared circle.

JT: Watching the (then) Cassius Clay vs. Sonny Liston Fight , Feb. 28, 1964 is what lit the fire in me for Boxing. I told my Mother, “Oh, Mama! I wanna be just like him!” She said, “You can be anything you want, but shut up right now … we watching the fight!” My first Boxing coach was Ed Duncan, he took me through my amateur career, finishing 92-8. You right, I had to leave Tulsa to pursue my Professional Career which I started in Chicago with my manager Him Kaulentis. He took me to the top. Ernie Terrell was my first Promoter in Chicago.

I’ve read that you had a tremendous amateur record, faced future boxing greats such as Greg Page. Do you feel today’s USA Boxing system is as good as it used to be? What can be done to improve it?

JT: Yes, I’m very confident of today’s USA Boxing system. Nothing but good things to say about it.

You fought so many top-notch professionals during your career (Mike Weaver, Pinklon Thomas, Tommy Morrison, Earnie Shavers, Carl Williams, etc.). Who hit the hardest? Who was the fastest? Who was the most difficult opponent of your career?

JT: Earnie D. Shavers (The D is for Dangerous) was the hardest hitting and most difficult. Greg Page was the fastest.

Was the victory over Earnie Shavers the biggest of your career? He was certainly known as a mammoth puncher.

JT: Domingo D’Elia was the biggest win. That was the elimination to fight for The Championship vs. Mike Weaver.

Let’s also talk about your success outside the ring. You had a role in Steven Spielberg’s “The Color Purple.” Tell us about that experience. What was it like being Oprah’s boyfriend? Ha!

JT: It was a great experience. I’m anxious to do a real Cowboy movie before it’s all said and done though.

Most new boxing fans know you from your tussle with “Iron” Mike Tyson. You actually gave Tyson a pretty good fight, going the distance when few others could not get out of the first round. Give us your memories from that fight.

JT: I knew, he couldn’t box & move. I had fought other guys with the same problem. I knew they was building him up to be the youngest heavyweight in the record book. The same thing in my head in the middle rounds, was the same thing in my mind as when I first stepped in the ring … “This Boy ain’t got nothing for me.” Every Fighter has to step in the ring with the attitude, “I’m gonna kick your Ass!”

Plus, I had just found out what was plaguing me my entire career up to that point, specifically food allergies that made me short of breath and fatigued after 5 rounds. I changed my diet … so I was more than ready for Tyson.

And, last but not least, where did you get your classic nicknames? Give us the story.

JT: When I started my Amateur career in 1973 (in my hometown of Tulsa, OK). I was getting ready for my first newspaper interview, everybody had a nickname, except me, my cousin Keith “Beaver” Reed said, “Your name should be Quick”… I told the reporter, “Alright, put it down”!!!

The Fighting Cowboy moniker, That honor came in 1985 from Muhammad Ali and Drew Bundini Brown – they Made up this poem:

And I been a Cowboy since 4 years old (I’m a REAL Cowboy, not a Fan, I Ride, Calf Rope, Shoe my own Horses). It’s in my Blood from my Great Grandpa!! My Loves are in this order: The Lord Jesus Christ, my Wife, Cowboying and Boxing.

To order a copy of “12 Rounds in Lo’s Gym: Boxing and Manhood in Appalachia,” click HERE

For information on the “Lo’s Gym Book Tour,” click HERE