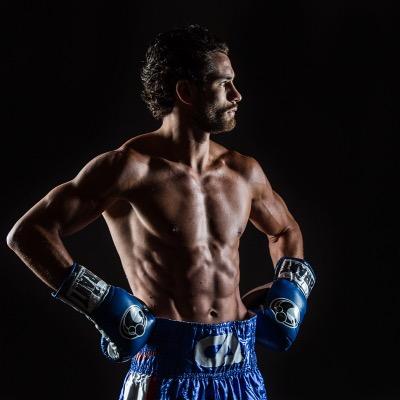 “12 Rounds in Lo’s Gym” is not your typical boxing book. It’s the story of an Appalachian-coal-mining-boxing-trainer, his makeshift boxing gyms located in Beauty Shops and Baptist Churches. In the spirit of the book, I’ve decided to feature a few pugilists with unique paths to glory. To say today’s guest had a non-traditional path to the WBO Welterweight World Championship would be an understatement. Middle-class background? Huntington, New York? College education at Stony Brook? Graduate degree from NYIT? Kickboxing? A boxing nutritionist? Guys like that aren’t supposed to become World Champions. Right? Today’s guest is a one of a kind, to say the least.

Over the course of his professional boxing career, he compiled an impressive record of 21 wins to only 3 losses (no shame in losing to the likes of Manny Pacquiao, Amir Khan, and current IBF Champion Errol Spence). He is the former WBO Welterweight Champion of the World, winning the title in sensational fashion against Ruslan “The Siberian Rocky” Provodnikov. Please welcome to the “Lo’s Gym Blog,” the toughest nutritionist you will ever meet, Chris “The Fighting Collegian” Algieri.

Your story doesn’t quite fit the traditional boxing narrative. Give us the story of how you found your way to the squared circle?

That is an easy story for me to tell. I grew up loving the sport. Boxing is the first sport I can remember watching on television. I came up in a middle class family in Huntington, New York. Huntington is, of course, an expensive place to live so everybody has to work. So, I spent a lot of time with my grandparents, who were from Argentina where soccer and boxing are the national pastime. My grandfather, Carlos, was very influential to me. As a kid, I wasn’t super interested in soccer so it was boxing. I can remember sitting on my grandfather’s lap and watching ESPN Tuesday Night Fights, Friday Night Fights, all of it. He ordered every single Pay-Per-View. Tyson. Oscar De La Hoya. He never missed a Pay-Per-View. My grandfather was my hero and he spoke so highly of those great champions. It was inevitable that I would try to become like them.

From what I already know about your story, it sounds like you and I had opposite experiences. I decided to give up boxing for college and you almost gave up college for boxing.

That’s right. I had the opposite experience. I almost dropped out. I was kickboxing at the time that I was in school. I was already a world-class kick boxer as a teenager so I took the sport very seriously. Huntington, New York is a tough place to find good sparring for kickboxing so I would often go to boxing gyms. I had to spar boxers. The coaches would always compliment me and say things like, “you can really box … you’ve got a little boxer in you … you understand the game … you can punch.” Once I really started doing well I began to feel like school was getting in the way of my progress. I absolutely wanted to drop out. I wanted to drop out of school and move to Brooklyn and train at Gleason’s Gym.

What kept you in school?

I attest that to my family and my upbringing. My brother has been a huge influence on me becoming the man I am today. Education was stressed as being very important in every section of my family. So, it wasn’t just my brother. I was getting it from all over. I had those ideas of dropping out but didn’t want to tell anyone. Finally, I talked to my brother about it. He was like, “Bro, you can’t do that.”

As a professional boxer, your cross-over moment came in that unforgettable war with WBO Junior Welterweight champion Ruslan Provodnikov on HBO’s Boxing After Dark at Barclays. Take us back to your memories of that fight. How did you find the inner strength to overcome the swelling in your eye, those knock downs, and get up and win?

I was 19-0 going into that fight. I had fought some tough guys but I am a very technical boxer. Defense was always paramount. My jab was good. I had fights all the time but my friends would always remark that after the bout was over I didn’t have a scratch on me. Most of my career was like that. If you’d only watched me box, then you probably thought I’d never been in a tough fight even though I’d fought some tough guys. For instance, Emanuel Taylor was a dangerous fighter. He was skilled, was a National Amateur Champion. I was actually the underdog in that fight. But, I boxed my ass off. It was a nearly perfect fight. Boxing fans knew me as a smooth boxer. Nobody in boxing knew that I was tough. That’s because they didn’t follow me as a kick boxer. In kickboxing I had been dropped, hurt, had been in tough wars. Kickboxing is a tough sport in general. Ruslan and his team picked the wrong guy.

I must admit, going into that fight, the tape I’d watched of you gave me the impression that you were an in-and-out, ring generalship, type of fighter — the kind of guy who avoids those back-and-forth fights that most fans love.

Kickboxing has no jab. If you were to jab, you’d probably end up with broken ribs. The footwork is funny as well, lots of bouncing and you stand tall, not like boxing at all. When I made the transition into boxing I wanted to focus on my weaknesses. The jab and footwork were always my primary focus. If you were to go back and watch my first five fights, you’d have seen that I was much more aggressive. I had KO’s early in my career, before running into repeated hand problems. The hand problems were another reason that I had to switch things up and become more of a boxer.

You certainly displayed an equal amount of toughness in your bout Pay-Per-View title fight with the great Manny Pacquiao. What was it like getting in there with Manny?

For one, Manny is tough to prepare for. Nobody moves like that. It even took Juan Manuel Marquez four fights to figure him out. If you remember, the first time they fought he was dropped 3 times in the first round. Manny punches from crazy angles. He’s super tough, hits hard, and is a very difficulty task for anybody. There isn’t much you can do to prepare for a guy like that.

Most of your professional fights were in New York. I’d imagine fighting Manny in China made the task all the more difficult.

We thought we were prepared for that. But, I’ll admit we had trouble with the food over there. I didn’t think it would be that bad. I had lots of trouble getting the weight off and even more trouble putting it back on. I was a shell of myself by fight time. I couldn’t hold on to the water weight. With that being said, China wasn’t the issue. We had the wrong game plan and Manny fought a great fight.

You’ve faced some great fighters. How different is Manny’s punch?

People always want to talk about who hits the hardest. Everybody hits hard. Amir Khan hits hard. People would say to me, “Khan can’t punch.” Every boxer at the top-level hits hard. It’s just those angles that make Manny different. He can generate power from very strange, very sneaky, angles.

You’ve had an impressive career as a professional. Looking back, is there one victory that means more to you than the rest?

I’m proud of all of my victories, even the 4 round fights, the club fights. But, one that sticks out to me is Jose Peralta. It was prospect vs. prospect. The fight was on NBC Sports, it was my first big TV fight. The guy was tough. I even had folks close to me trying to talk me out of fighting him. They were like, “No, we don’t need this guy right now.” But, I told them, “Naw, I’m doing it … I want this fight.” Going into it, I also had a broken thump. I had to dig deep to win that fight.

You mentioned Khan earlier so let’s go back to the Amir Khan fight. Many boxing fans felt like you were robbed in that fight.

Even though it didn’t go our way on the scorecards, the Khan fight is actually one of my favorite fights of my career. It was fun to watch. I would watch the fight and almost forget that it was me in there. Look, Khan is a superstar. The guy is phenomenal and is a special boxer. But, that was a fight I really wanted. I felt like it was a good matchup for me. I wish the decision had gone my way.

I’d like to end by talking about your career as a nutritionist. I really enjoyed watching you interact with Daniel Jacobs on HBO’s 24-7 reality series as he prepared to take on GGG.

It was a really great experience. He trained so hard. He was super prepared. I was honored that he wanted me in the corner for the fight. I worked the corner for that one and for his last fight. Daniel is a great person and an awesome champ. It’s an honor to know him.

Was that a special case, working with Daniel Jacobs? Or, do you want to use your knowledge of nutrition to help other fighters?

He’s a special case. But, I am currently in camp with Sullivan Barrera. I am in his camp right now. He’s getting ready for his March 3 fight at Madison Square Garden. I am a fan of him. He is really good. I was a fan before joining his camp.

You almost dropped out of college to become a professional boxer and now you are using the knowledge you obtained in school to help other boxers. Chris, you certainly have a unique story.

I was actually Pre Med, starting out. Then I fell in love with nutrition. Nutrition was important for what I was doing so I felt like I really needed to understand what was being discussed in class. I was fascinated by how food can help us heal and I took it upon myself to specialize in clinical nutrition. I later received my certificate in sports nutrition.

Okay, so it is January. Any diet tips for the New Year’s Resolution crowd?

Yes. Absolutely. I am going to go slightly against the notion that “breakfast is the most important meal of the day.” Your first meal after a workout is the most important. What you eat determines how the body will recover and grow and heal, depending on the kind of workout you are doing. If it is a hard and intense workout, go for the protein. If you are training for endurance, go for the carbohydrates.