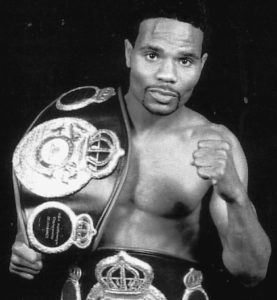 He is a former middleweight champion of the world. He has compiled an impressive record of 40-7-2 during the course of his 18-year professional career. He has faced some of the greatest middleweights of all time, Roberto Duran, Bernard Hopkins, Felix “Tito” Trinidad, and Jermain Taylor, just to name a few. Since retiring from the sport of boxing in 2011, he has worked to give back to his community via “Breakfast with Boxers,” an organization that aims to help fight homelessness by encouraging everyone to get involved in restoring those who have fallen on hard times, providing warm meals and encouragement to those who need it. In anticipation for the release of “12 Rounds in Lo’s Gym,” I took it from West Virginia to Maryland, decided to check in with Rockville, Maryland’s favorite son – William Joppy.

Let’s set the record straight. You are often cited as a Washington D.C. fighter but Maryland is your home state, correct?

Maryland. Yes, sir. I was born and raised there. Rockville, Maryland. Lincoln Park is my home. My mother and father were from there. My whole entire family.

What was the boxing scene like in Maryland when you were rising up through the ranks?

Boxing was awesome in the area. We were right outside of Washington D.C. so most of us trained and sparred in boxing gyms in Washington D.C. and the guys from D.C. came over and trained in our gyms too. It was all a connection. In my era, we had top professionals like Simon Brown, Maurice Blocker, Keith Holmes, Sharmba Mitchell, “Too Sharp” [Mark Johnson] and “Chop Chop” [DeMarcus Corley]. And, I sparred every last one of them. They helped me get where I had to go and I’m sure if you asked those guys they would say the same about me.

Does the state of Maryland deserve more credit for being a location that produces world-class professional boxers?

You had a brief but successful amateur boxing career. Tell me a little about your amateur days.

Actually, I only had 40 amateur fights. I was 36-4. And, I actually lost in the Olympic trials to Chris Byrd. It was the semi-finals. Chris was boxing as a middleweight back then. Of course, he ended up being a WBC heavyweight titleholder. But, he won the silver medal in the Olympics at middleweight that year.

Chris Byrd was a master defensive fighter, made some top-notch heavyweights look very bad. I could only imagine how good he was as a middleweight.

Man, he was real slick. Hard to hit. He did good as a heavyweight but I think he should have stayed at the middleweight divisions. He’d have been hard to handle.

Let’s talk about your professional career. Do you have a singular moment that you look back on and say … “that was my proudest moment as a fighter?”

Absolutely. When I won the title (against Shinji Takehara). Winning the title took me to places that I never thought I would make it to. I think back to that day in Japan in June of 96 as the turning point in my life. In my career, I was a legit 2-time middleweight champion of the world. I don’t say 3-time because when I had that last title Hopkins was the real champ. But winning the title that first time is the moment I won’t forget. I still think about it.

If beating Takehara was the brightest moment of your career, fighting Roberto Duran had to be the strangest. Correct? You probably had mixed emotions going into that fight.

He was my idol. I looked up to him so much. Duran is a real legend. That fight was somewhat of a sad victory. I knew he was older but I had to get him or he was going to get me. I had to watch him. He was a no nonsense guy so I had to keep an eye on him. But it was my time.

Did you watch the recent Roberto Duran movie – “Hands of Stone”?

(Laughs) No. Actually, I have not seen it yet. But now that you mention it, I want to check it out.

As a professional, who was the toughest fighter you faced that most “new school” boxing fans probably don’t know about?

Julio Cesar Green. No question. Man, those first two were tough fights. The first two were very rough. He brought the best out of me. It was a great experience. Talk about a hard hitter.

As a professional, you essentially fought everyone in your era? Was there anyone that you wanted to fight than you didn’t get the opportunity to compete against?

You also had a big fight against Bernard Hopkins. What was it like getting in there with B-Hop?

He uses that head. He hits low too. He’s a great fighter. Don’t get me wrong. He’s great. But, I was never was a fan [of that style]. I admire his dedication inside and outside the ring but I do not put him in the same category as Leonard or Duran.

In my upcoming book, “12 Rounds in Lo’s Gym,” there is a scene where two of my father’s pro boxers (Jason Bragg and Alec Anderson) are set to fight on the undercard of one of your headlining bouts. The event was located in Elkins, West Virginia (October of 2007). We traveled to the fight that night believing that you were going to be fighting in the main event. Credible boxing websites even listed you as the main event. Spoiler Alert – that bout never came off. Do you recall what happened?

(Laughs). Yes, sir. I do remember it. I do. It was just going to be a stay busy fight, a tune up fight. I remember that one that was going to be in West Virginia. Let’s just say everything fell through at the last minute.

What is the champ into these days?

I am getting into motivational speaking. I love talking to kids about my boxing career and about making it to their goals. My message is stay hungry. Lot of people reach their goals and get comfortable. When you get comfortable that is when you start your decline. Comfort is the enemy to success. When I talk to kids I use my career as an example. I could have did better and fought longer. Money and women and other things became a distraction. At the end, there were some fights I shouldn’t have lost. That Taylor fight. I should have won it. I was doing things I shouldn’t be doing. That’s why I have to give Hopkins credit. He lived a clean life. He did the right things. He is a prime example of what can happen if you live right. It paid off for him. He fought till he was 50 because he did it the right way. He stayed with the same woman all of those years, his wife. He had the right mindset.

Now that I am old, I wish I would have had that kind of mindset. To reach your goals you have to stay focused and stay hungry. You can’t get comfortable. When I talk to kids, my message is stay focused and keep your eyes on the prize. Always keep that same mentality that you had when you were starting off. Once you accomplish a goal, you have to keep that same mentality. I never had money when I was coming up. Through boxing I gained access to money and started having fun and got off the right track. Now that I am older I want to give that message to people who are chasing their dreams.

During my recent conversations with boxing celebrities, the topic of community service keeps popping up. I hear that you founded a very noble community outreach project titled “Breakfast with Boxers.” Want to tell my readers about it?

I am really proud of the work I am doing with “Breakfast with Boxers.” I talk to homeless people. I talk to people who are down on their luck. I want to help people like that keep the right mindset and get through a tough time. I’d like your readers to check out our website. My message is that you can achieve anything in life if you keep the right mindset and keep good people around you. Please check out the website. It’s a great program.

You’re doing noble work, champ! Thanks for the conversation and best of luck.

No problem. Thank you.