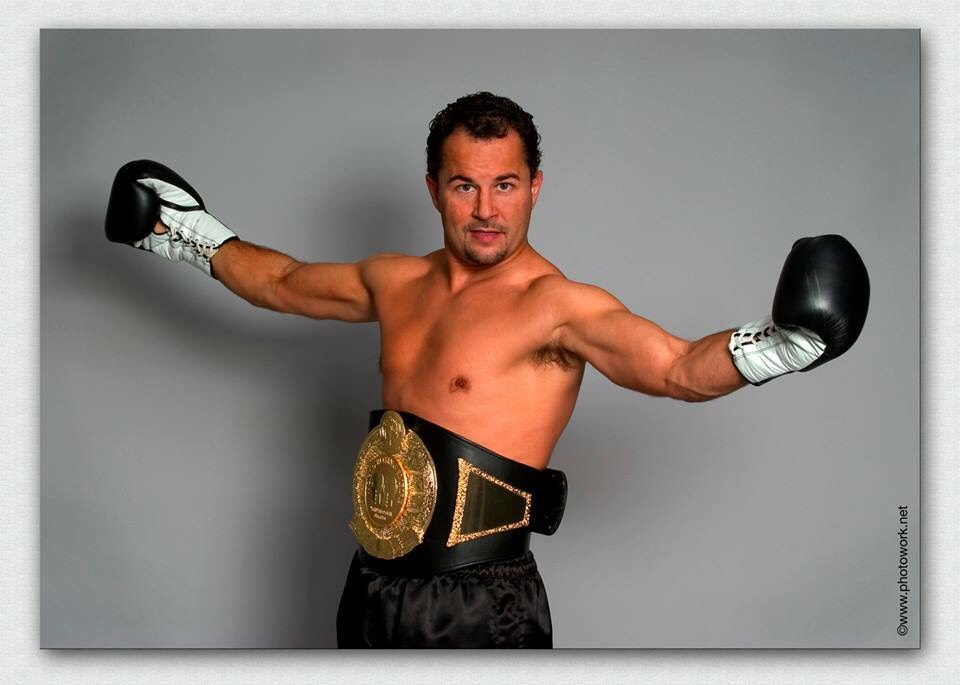 In anticipation for the upcoming release of “12 Rounds in Lo’s Gym: Boxing and Manhood in Appalachia,” we are checking in with some of the most accomplished and respected boxing figures from the state of West Virginia. These are road warriors, guys who fight anyone, anywhere, anytime — Appalachian underdogs of the squared circle. Their toughness mirrors the toughness of West Virginia. Today’s guest is no different.

During the course of his professional career, he compiled an impressive record of 26-2-1. His biggest bout came against Boxing Hall of Fame inductee Hector “Macho” Camacho at Reliant Arena in Houston, Texas. He has won the World Boxing Foundation Super Middleweight title as well as the World Boxing Federation Intercontinental Championship. He is a coal country warrior and one of the true good guys in Appalachian boxing, always giving back to the community. Please welcome to the “Lo’s Gym Blog,” Perry “The Punisher” Ballard of Madison, West Virginia.

12 Rounds in Lo’s Gym” is not just the story of my father’s boxing club. It is a story about what it means to be from West Virginia. As a native of Madison, West Virginia, tell us what makes West Virginians so tough?

PB: Being born and raised in southern West Virginia,one becomes tough on the day that you are born. The ups and downs of the coal industry indirectly touches everyone’s lives, when the railroad trains are not carrying coal cars out of the mountains it symbolizes that in the majority of the area there is no work. I was born the 8th child of 10 children from a father who worked on the railroad for 43 and a half years (with no lost time injury ever reported) and a mother who could whip up a goulash supper when there was no money to buy groceries. Being tough was a daily chore in my household. With six brothers we all had to find our way and being tough was a standard. Being tough was savoring the moment to go to school the next day to get a breakfast and lunch to ease the pain. This is no “pity party” this is just life as we knew it. We were a proud family that did our best.

Over the course of your professional career you racked up an impressive record of 26 wins to only 2 losses. Which of those 26 wins was the most satisfying?

PB: You know it is really hard to say what was my most satisfying victory. One in particular, I had my jaw broken in the second round yet went 7 more rounds before tko’ing my opponent and taking the victory. After a stop at my sponsor (the Moose Lodge in Leesburg Virginia) I immediately went to the hospital where they admitted me and where I had emergency jaw surgery.

Another victory was against a larger opponent in Bobby Elkins, who was known for his left hook and ko’ing his opponents. He caught me in the first round with a big shot and followed it up with a massive left hook that momentarily stunned me. I made it to the second round and I was feeling my opponent out and I knew there was an opening for an uppercut. Johnny Johnson, my trainer, had a plan for me to go to his left and then plant myself and let him walk into an uppercut. Johnny saw something in the previous round and he told me and it worked like clockwork. He had a big hook yet I still went to his left and he walked right in to a massive uppercut. I rattled him as he stumbled across the ring eventually falling. World class referee Dave Johnson gave him the eight count yet he looked as if he did not have his faculties all together. I jumped on him until Dave Johnson called off the fight. With that victory I became a middleweight champion.

Lastly, my victory over Jimmy LeBlanc rings high on my list. Jimmy was a technical fighter but just did not have the power to put one away. He knocked me down two or three times in the first three or four rounds but yet I kept coming forward. I knew in the fourth round when my corner man Keith Keller said that I was taking too much punches that he may stop the fight and I told him I am a fighter I know what I’m doing and I got him. The referee gave him warning after warning because of his excessive holding but I pounded away at his ribs. The punishment was too great for Jimmy and I realized that I was taking his air out of him and this would win me the fight. This was a classic moment for me fighting in front of a lot of family and friends in the Northern Panhandle of West Virginia for the USBC Middleweight title. There was a lot of stress on me because I had a terrible training camp due to an illness I had and also the fact that Jimmy Lange one of my only two losses was sitting at ringside probably chopping at his lips seeing me getting beat down in the earlier rounds. This was truly a victory of will and endurance. This again was of one my Rocky Balboa moments.

In 2008, you took on boxing legend Hector “Macho” Camacho. From what I understand, it was one wild night in Houston, Texas. What is your lasting memory from that experience?

PB: There are many memories from fighting Hector Camacho and the build-up to the title bout. From the promotion team trying to keep Camacho from skipping town or going out to party or Hector weighing in during one of his bizarre moments, as he weighed in completely naked in front of all the television cameras. Haha. He was truly one of a kind and completely arrogant at a fault. Hector was a fighter that I looked up to throughout the years watching him fight the likes of Oscar De La Hoya, Felix Trinidad, Julio Cesar Chavez, Roberto Duran, Vinny Pazienza, Greg Haugen, and countless other world champions. After they announced our names in the ring for the fight I was somewhat mesmerized by going face-to-face with Hector Macho Camacho but over his shoulder was also a living legend Angelo Dundee working in his last World Championship. Although the fight did not go my own way I gave it my best until a head clash over my left eye caused a major cut which eventually I had to receive 26 stitches.

I am very grateful for the chance to have fought Hector and I have to give praise to Southwest promotions, Donna English, and John English her right hand man. This coming year will be the 10th year anniversary of my bout with Hector Camacho, who was a living legend. I have went on to have 6 more additional bouts picking up the WBF Super Middleweight title and WBB Light Heavyweight Titles. Even in defeat, I will never forget the Hector Camacho bout and the friendships that I gained with Donna and John English.

I know that you are familiar with my father’s gym and work as a community organizer in Cowen, West Virginia. For those unfamiliar with the story, please talk about the importance of youth outreach programs in rural Appalachia.

PB: Lo’s Gym was known statewide and in the surrounding states. It was an important part of the community and the development of young men and women. I personally feel that we should have more communities that have boxing gyms not only for competitive but for the physical aspect getting the youth and young men and women in shape mentally and physically. I continue to donate to one of my favorite boxing gyms the “Hometown Heroes boxing gym” in Charleston West Virginia, that is ran by a Boone County native, Gary Tony. His gym not only helps out with local boxers but also helps out with local individuals fighting Alzheimer’s and other physical ailments.
West Virginia needs boxing gyms and somehow we need to get WV County Commissions involved financially and to spread the word of this great sport but to keep kids off the streets and out of trouble just like your dad’s (Lo) gym did in Cowen, West Virginia.

What, in your opinion, could be done to improve the boxing scene in West Virginia?

PB: We need the State of West Virginia and the legislators to find funds for counties that have not-for-profit gyms or County gyms to put boxing in a Forefront to help the communities with the kids that want to box and troubled youth that want to box but don’t have the money to join a gym. Boxing Gyms could be modeled after Lo’s boxing gym which has helped many kids become responsible adults.

What is Perry Ballard into these days?

PB: I am the owner of Ballard Safety, LLC a safety consulting firm that helps companies throughout the Metro DC area stay in compliance with OSHA regulations. I also have a Ballard Safety Construction Division who just completed a 2.2 million dollar project for the federal government. I continue to workout and box daily in my gym and hope for one last fight even at the age of 50 years old. I defeated Steve Walker for the wbb light heavyweight title in Charlotte North Carolina this past July (2017). I love this sport of boxing and will continue on as long as I can continue to perform well.

I continue to donate to boxing clubs and charitable organizations such as Hometown Heroes boxing, a non-for-profit Boxing Club. I also donated $5,000 to my former High School Scott High in Madison West Virginia and I gave $2,000 to my alma mater, Fairmont State University. We must never forget where we came from. Although, I now live in Martinsburg, West Virginia and I have lived in Miami, Florida, Tampa, Florida and Leesburg, Virginia. I am always Boone County, West Virginia proud and I live everyday thinking and trying to make West Virginia a better place to live and raise our children.